Ok, so how many of you knew that last Friday was the official Take Your Dog to Work Day?

Uh huh.  Yeah, even in my dog riddled world, that kibble of info slipped past me. But then, it’s kinda every day that I take my dog to work with me. I’m rather blessed in that – working in a pet food business definitely has its perks. But apparently, this particular event has been going on for some time now.

First celebrated in 1999, Pet Sitters International’s Take Your Dog To Work Day® was created to celebrate the great companions dogs make and to encourage their adoption from humane societies, animal shelters and breed rescue clubs. This annual event asks pet lovers to celebrate the humane-canine bond and promote pet adoption by encouraging their employers to support TYDTWDay by opening their workplace to employees’ four-legged friends on this one special day.

Well, who knew? But any efforts to raise awareness of adopting shelter and rescue dogs grabs my attention. And even better, my office celebrated this auspicious event by coordinating some fun lunchtime activities with our fuzzy co-workers.  Now, there’s many of us that do bring our dogs into the office to spend the work day with us, so we get the occasional impromptu play date in our company pet park when the potty schedules coincide.  But since this was an official holiday, on this day we had some creative organized activities.

So, we started off with the Longest Sit/Stay. Ah, I thought, this should go well.  I’ll try to keep my poker face and not obnoxiously gloat when Yaxley knocks the socks off everyone with his solid Sit/Stay.  Right.  Once again, I overestimated my dog handling skills expecting a six month old puppy to have conscious free-flowing thoughts while surrounded by gobs of dogs. Yax’s noggin kinda short-circuited.  While he wasn’t the first to break his Stay, he wasn’t the third one either.

Alrighty then, let’s do a quiet time-out and watch the older dogs do the next activity.

Next up – the Potato Walk. This involved walking a straight line while a potato is balanced on a serving spoon in one hand, the dog on leash in the other hand.  Last to drop their potato wins.  Sure, I tell Yaxley, we could have done that one, kid.  Naw, we couldn’t. Let’s be real. Maybe in another six months.
Last event was a twist on musical chairs. From our vantage point, this may have much more fun to spectate than participate. In place of chairs, pawprints were set about in a circle. Dogs and owners walked around the pawprints to music; when the music stopped, the dogs were to sit on the pawprint.  Now CCI pups are taught to walk, Sit and Down on unusual surfaces.  Many pet dogs are not. That was fun part to watch – utter refusal to place their doggy rump down on that. The rules were quickly adjusted to allow the dogs to just stand on a pawprint. The players were eliminated as a pawprint was taken away each turn, the winner is the last dog standing.
Here ‘s Yaxley and his co-workers burning off some energy before the games.  You’ll see the pawprints on the ground that were so carefully measured out and placed in a circle being scattered about by the excited dogs.

Now check out the faces on these pups. You don’t need to be an expert in canine body language to see that these are dog smiles.
Of course we had refreshments for the fuzzies, as well.  A round of Frosty Paws for everyone. Yaxley got a euphoric Zen moment going with his cup. 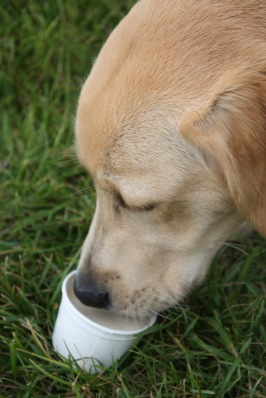 We had a bit of a side discussion about Frosty Paws.  Someone asked if anyone thought a person could buy these dog treats by mistake and actually eat it? What would happen?

Well, it ain’t gonna kill ya. But you probably won’t enjoy it as much as your pup does, that lack of sugar and all. Guessing it would be a once in a lifetime experience. Self-correcting behavior, as it were.

More photos of the event are on the Eukanuba and Iams pages for those of you who partake in the Facebook experience.

Lover of all things Dog.
View all posts by Donna Black-Sword »
← A food motivated dog is a piece o’cake
Micron and the campus life →