A food motivated dog is a piece o’cake 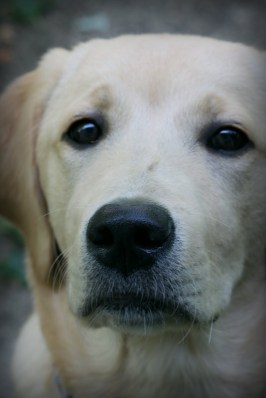 Our little boy has started school ~sniff~. They grow up so fast, don’t they?  One minute you’re inhaling puppy breath like it’s snickerdoodle scented or something and then [blink] next thing you know, the dog is asking for a lift to Petsmart so he can meet up with that cute golden-doodle he met in puppy class.

People remark on how well-behaved Yaxley behaves in public. Well, the dog is kinda with me all the time, so he’s bound to get some attitude adjustment during the day. So when we head off for some structured obedience training, I have a talk with the trainer at Petsmart just to give her a heads up.

I brief her on CCI’s command words and let her know we have the basics covered – Sit, Down, Bed, Heel, Come when called – but it would help to reinforce these in a distracting environment. Like, say, around hyper puppies who may not have the upper advantage of hanging with their person all day, every day.

So she wants to see if Yax can test out of basic obedience and start directly into the intermediate class. As I step aside, she puts Yaxley in a Sit and walks a circle around him. She drops a dog treat onto the floor, but he doesn’t break eye contact with her. Another dog treat, then another, bounces off his paw. The two of them have some kind of Vulcan mind meld thing going on.  Yax doesn’t move.  She grabs a handful of tennis balls and bounces them one by one past him. The thought bubble over his head is “what’s a guy gotta do around here to get a dog biscuit, anyway?” And there’s a slobber string that’s now touching the floor.

Ok, she says.  Let’s try something else.  She tells me to walk Yaxley through the store, in Heel position, while she walks ahead of us.  Then she’s flinging dog treats on the floor — as we’re walking past the cat adoption section. So can you picture this: there’s kibble pinging off the vinyl flooring in front and cats all fuzzed up and flipping out and Yaxley is doing his thing.  Perfect.

We go back to the training room.  And she says, “what is it you want to work on again?” Um, basics with distractions?

Yeah, so we may need to kick things up a notch for the next class.

Why focus is so important

Because Yaxley is training to be an assistance dog, he needs to be focused on his handler. What is it you want me to do next, Food Lady?  An assistance dog will go anywhere his human partner wants to go, which would, of course, include restaurants. I’ll be up front about it and admit that my pet dog in a restaurant would only result in an embarrassing event that may or may not involve the authorities.

Not so with the CCI pup, though. These fuzzies are not pampered with people food or fed from the dinner table. You know that first rule of dogdom – “if it hits the floor it’s mine.”?  CCI pups have to waive that rule. The new rule is “it’s yours when you’re told it is.”

I realize that can sound a little harsh, maybe not the way you would treat the dog that you love so much.  But let’s think this through for a minute. So number one, the dog is not starving by any means. Instead he’s certainly well fed, well loved and (Bonus!) well behaved.  And the pup does get treats; lots of them actually. But each one is earned. No gimmies. A good Sit with eye contact is sometimes all that’s being asked.

And – this is the important part -a person going into a restaurant needs their assistance dog to focus on what’s going on.  Not what’s yummy on the floor.  Hoovering the carpet all the way to the table is not a desirable thing here.

It’s too late for Jager; way too late. Too much street dog in his history to do anything about his nasty little habit of food stealing. So he’s banished from the kitchen when I’m cooking up dinner. Not because I’m witchy mean in the evenings, but because I’ve tripped over the goober dog while he’s right there mentally willing stuff to drop from the counter.

The Yax man, however, is comfortable on the kitchen floor. Just watching and happy to be hanging with me. Pretty darn good for a little guy, I think.