I have a deep respect for the Boy Scouts of America program. I’ve seen for myself how this organization, with the guidance of committed parents, can transform a seemingly goofy kid into a young man with leadership skills.

For a boy to advance among the BSA ranks, he’s required to earn a number of merit badges. By the time he’s working on Eagle, the highest rank, he’ll have completed at least 21 merit badges. He’ll have focused on life skills, survival techniques, and have been introduced to several vocational choices. This is the stuff he needs to not only get by in the world, but to excel. Be head and shoulders above others.

It’s really a good idea for the scout to go to a BSA summer camp to earn merit badges. Even a weekend camp will have specialized merit badge counselors offering opportunities to work on things that just aren’t available at home.

So with this in mind, we set off to CCI summer camp with little Yaxley in tow.

Yaxley:  I don’t wanna go to camp! I just wanna stay home and chew on Jager.
Me:   You’ll love it. Really.
Yaxley: (whining)   I won’t know anyone there.
Me:   That’s the point, kiddo. You’ll make new friends. Got your stuff packed?
Yaxley:   aww
Me:   Criminy kid. Enuf already. Just get in the car.

Well, that brought back memories.  Except for the chewing on Jager part.

And like at every BSA summer camp where you have that one kid running rings around the campfire with a stick on fire, Yaxley was determined to show us how much we still have to teach him.

Our CCI camp counselors, Mary Beth and Jenny, set up an obstacle course for the pups. The intention is to introduce the pups to new experiences. It’s all about working towards that been-there-done-that mental state they need as assistance dogs.

Our first station was at the tires. The point was to simply walk through and move on. Yax had some trouble getting his head around this one.  A little gentle coaxing with a dog biscuit from co-puppy raiser and then me putting down the camera and stuffing his body into the first tire was all it took. Once sitting inside the tire, he realized it was not indeed a Pit of Doom and found a reasonable comfort level. Ok then, let’s move on to the ladder station.

This went much better now that Yax knew a dog biscuit would be involved. He stepped in, looked to see that, yup, there’s a treat in hand over there, then moved along.

Check out that look of concentration he has in the second shot. Furrowed brow, tongue pressed between lips, and tail up for balance. He’s all over this one.

Now for the weird surface of the wading pool. No problems here. We also want the pup to be able to perform a Sit and Down on these new surfaces. Which Yax did do, but I can’t post the photo of the Down since he took the opportunity to roll onto his back to look like some kind of furry dead lizard baking in the sun.

Almost done. Now for the crate surface. A walk across, with another Sit and Down. A pro, he is. Well done, yellow dog.

Ok, so CCI doesn’t really give out merit badges at summer camp. And that’s ok, I think, since it would just end up being something else to finger swipe out of a puppy maw. Instead Mary Beth had a much better reward for achieving all the accomplishments this morning.

The pups had a chance earlier in the day to meet a pony, duck and a rather ticked off rooster. Now time to meet the milk goat.

Manna from heaven, ambrosia from the sky. Fresh goat milk comin’ at ya.  Just a couple of squirts to get the idea of the thing, then Yax closes his eyes to fully enjoy the experience. 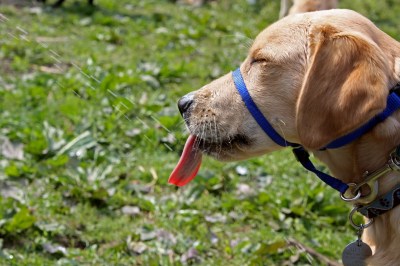 Yaxley tells me now that summer camp is great!  He wants to go again next month.  Not a problem, kid.  I think we will.

Lover of all things Dog.
View all posts by Donna Black-Sword »
← The Mighty Micron
A food motivated dog is a piece o’cake →