Ow!, cries Yaxley. What are you doing? Brain surgery? Hey, I think you missed the frontal lobe this time.

I pause with the cotton ball and level my eyes with his. Will you hold still a second and quit that whining, you pansy flower. Cleaning your ears does not hurt, I tell him.

Yeah, he says. At least it’s not supposed to.  What’s with all this grooming and fussing anyway? I feel like the cowardly lion at the munchkin spa. He lifts his right paw towards me and turns his head . Just buff my nails, will ya? No polish.

Yax, my love, I patiently remind him again as I clean between his webbed retriever toes. We’re entertaining guests today here at the office. I want you smelling your best for your visitors.

His eyes brighten at this news. Right! Yaxley says. My friend Preston is coming in today. Do you think he remembers me, though?  It’s been a few months since I met him at BlogPaws last fall.

Well, you guys talk online quite a bit, but I guess we’ll just have to wait and see if he remembers what you smell like, I say. What about you? How well do you remember Preston?

Oh! I do!, Yax closes his eyes and his nostrils twitch. He’s all dog cookies, attitude and adventure. He smells a lot like a terrier, actually.

Yup, that makes sense. Preston is indeed a Westie, I tell him while brushing out his tail.  A West Highland Terrier. And he’s kind of a big deal, with that blog of his at Preston Speaks.  So I need to see some mature behavior . . . don’t you roll your eyes at me, mister . . . and make Preston and his brother feel at home here, I say.

And as I’m wetting down a cowlick on that yellow noggin, I see that Preston and Elvis are on their way to our cube.

Hey Preston! Long time, no smell!, says Yaxley. Welcome to my work. C’mon in and I’ll show you around. See? Here’s my bed, and my chew bone and my water bowl and . . .

Alrighty, Yax, I say. Let’s give the boys a chance to settle in. We’ll give Preston and Elvis a tour of the pet friendly office area and later we’ll have a pool party for you guys outside.

Southwestern Ohio certainly has not been exempt from the massive heat wave hitting across the contiguous states over the past week. You’ll note in the next few shots that the grass in our pet park is a shade of retriever yellow. Yaxley is darn near camouflaged out there in that crunchy expanse of lawn.*

Our forward thinking pet care team (thanks Jen!) had our guests in mind today and put out a wading pool for the boys. Preston had a great time cooling off, but Yaxley just wouldn’t have any of it.

He would, however, drink some of it.

In a vain attempt to outsmart the yellow dog and get him into the pool, I toss a high value squeaky toy into the Westie bath.

Yax is patient as he awaits the squeaky to float to the edge.

And he grabs the thing and takes off running and squeaking. 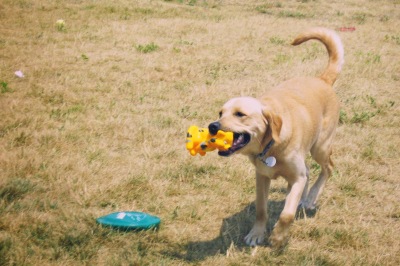 And he’s happy. And dry. So who am I to mess with that?

A parting shot to show that Yaxley says, yes actually, it is all about me.  Yaxley photobombs my shot of Preston in the pool. His tail makes a clever framing for this shot. At least that’s what I’m going with anyway. 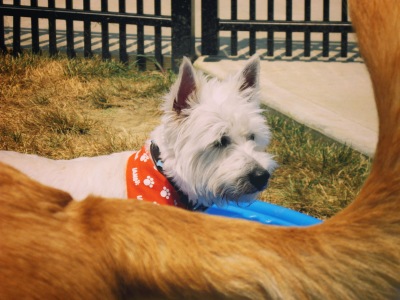 Read more about the adventures of Preston and Elvis at Preston Speaks, a blog from a Westie’s point of view.  Preston just finished a tour of the great states and he’ll be sharing all his derring-do in upcoming posts.

*To demonstrate the definition of irony, just as we’re all lamenting about needing some serious rain, we did indeed get exactly that. A massive storm came through later in the afternoon. The high winds whipped areas of Ohio taking out trees and creating power outages in the tens of thousands. So the lesson here is, it’s ok to do a rain dance, people, but let’s keep it to a waltz and not a breakdance or something.