Twitter Facebook RSS Feed
← Infographic on dogs in the workplace
What’s black and yellow and furry all over? → 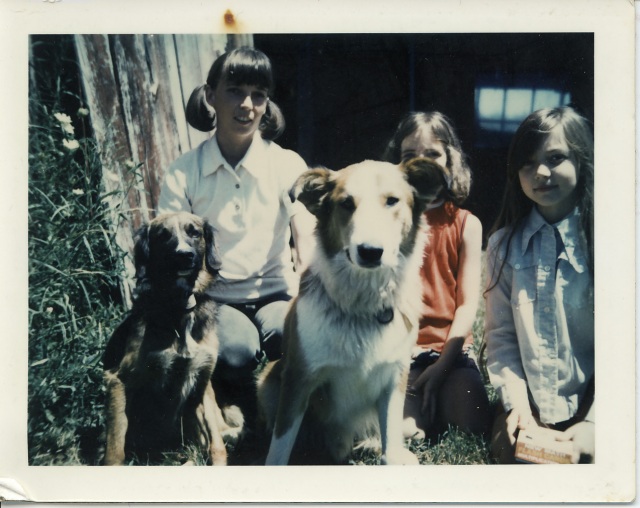 Hey kids!  Remember when photos came spitting right out of the camera? Your ‘rent would wave the photo in the air a few times, then you’d all stand around and watch as your smiling family developed right before your eyes?

Naw, I’m just messing with you. Of course you don’t. Heck some of you young folk have never held a film camera, never mind a Polaroid Land Camera. This incredible technology of instant gratification so popular in the ’70’s is now a mere part of our Americana history.

And here my friends, is a glimpse of farm life, circa 1972 or something like that. Straight from the spittin’ Polaroid image to my fancy-ass modern scanner. Raw and unedited, no Photoshop fix-up here.  Looks like three sisters and their dogs, right? That’s my mom on the far left. My little sister is in the middle getting photo bombed by a dog (snort), and my stylin’ self on the right.

Ever the nerd, when I wasn’t wearing socks with sandals, I was buttoning my shirt up to the neck. I apparently ditched the obligatory pocket protector and had decided to carry my math flash cards out with me for the photo shoot. And that hair style was simple affair, with the locks flowing down past my non-existent waist. Hair parted on the side because I saw Cher do hers that way once.

The farm dogs are the beloved Willie (left) and Ringo (right). The two never met a leash, but instead took on the role as my companions as we went on adventerous explorations in the woods near our farm. Ringo sported some collie genes and Willie appeared to be part wolverine or badger or something. We had to keep Willie away from the chickens. And my little brother.

This Time article showed up in my newsfeeds this morning. A creepy story made even more dire with the reference to the Dead Uncle.

So I write a story about Polaroid Land Cameras and Time shares a story about lost Polaroid photo. Published in the etherworld on the same day, people. And the photos, mine and the Dead Uncle’s, were taken about the same time. Yeah, give or take a couple of years, but that’s close, right?

Hyperbole. And a big, heaping dose of it, too.

Lover of all things Dog.
View all posts by Donna Black-Sword »
← Infographic on dogs in the workplace
What’s black and yellow and furry all over? →