And I found out a long time ago
What a woman can do to your soul
Ah, but she can’t take you anyway

You don’t already know how to go*

Ooh, I have got to get me this when we get back home! I say. I’m lovin’ this satellite radio in the rental car. This would help pass the miles away on that long drive to work, I think.

Are you serious? the Husband says. He’s being punny. Sirius Radio. Get it?  I let that one pass just as I did the last few times and start pushing more buttons.

I find the Click & Clack Brothers on NPR, a story being narrated on another station. New music, classic stuff, and what-the-hell-is-this-noise kinda tunes.  I geek around until we figure out how to filter the choices down to just Rock. And we land on the Classic Vinyl station.

And tell me all my love’s in vain*

Which is pretty much the same stuff we listen to back home. Yep, that’s how we roll.

After our visit to Canine Companions for Independence in Santa Rosa we hit the road to catch some more of the California scenery.  I want to check off another of my travel itinerary choices and head towards Korbel Champagne Cellars.

Hey, let’s get a bottle of fizzy wine and save it for my birthday! is my revelation for this visit.

Fizzy wine? the Husband asks. Is that a connoisseur term?

As an Expert of the Grape, I can say with authority, that yes. Yes, it is. I think it’s British or something. Because one of my friends from London says fizzy drink all the time, so I’m pretty sure I’m right on this one.

Although, I admit that during the wine tasting I was involved in a debate of how to pronounce Brut (broot or rhymes with butt?), the word fizzy was not heard.  But there wasn’t anyone on the wine cellar tour with a British accent, so there’s that.

Korbel has an delightful deli restaurant; a nice stop after the tour and wine tasting. These folk have it down, now.  Soften you up with their fizzy drinks then drop you off in front of the baked goods. I snagged a lavender brownie, which I know sounds a little off.  Unless you’ve had a bit of the bubbly to change your perspective.

But holy cow, that was decadent.

We’ve done our damage here and head back to the rental car with its are-you-sirius radio. Cool, Elton John’s next up.

Say Candy and Ronny have you seen them yet?
But they’re so spaced out

Ugh, I thought it would be a good Elton John song. I hate this one, I whine.  But do I change the station? No, I survive the next three minutes in the hope they’ll play Layla again to make up for it.  Just tooling along some scenic back roads for awhile, when I ask what’s next on queue for the afternoon. Back to the hotel for now, I guess, he says.

Um. Look at the compass, love, I tell him, putting my handy scout leader skills to work. We’re heading due west. Think about that a sec. What’s that big thing west of here?

Oh. he says. So we’re heading back for a another visit to the coastline. Which is what I wanted to do anyway, so he must have been picking up my vibes on that. Because otherwise he has a good sense of direction. Just ask him.

We twist and turn our way through cow country (California cows are happy cows!) until we get to Route 1.  Heading south, the shore is on my side of the car. I start lamenting, which is different than whining, that there’s people walking around down there!  How did they get down there anyway?  I’m not seeing anything like steps or elevators or other such helpful things.  After a few minutes of this not-whining he pulls the car over, spewing a bit of gravel.

Did you want to get out and look? he asks.

So, here’s the view from the overlook.

And here’s the view from the beach.  The squiggly pink arrow marks the sign (Miwok Beach) where I took the overlook photo.

You know what’s great about California? They don’t baby you with sissified things like guardrails at the overlooks or real steps down to the beach.  Oh, did you want down there, Buttercup? says California.  Well, mind your step then.

The trip down was a little sketchy, but I didn’t almost die. That kinda happened later in the week and we’ll cover that adventure in another blog post.  But I did heartily piss and moan all the way down about nearly busting my butt.

And this is the vulture that kept following me. It was starting to get on my nerves. 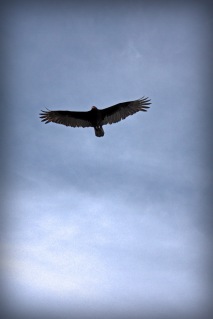 Anyway, we made it to the beach fully intact. I’m goofing around with the camera, when I see a couple of older gentlemen walking along.  Wearing khakis and sweaters tied about their shoulders, they look to be natives of this beach. The two of them just climb up and over the huge rocks along the terrain with the same ease you see in mall walkers back home.

Still out of breath from nearly rappelling the way down here, I am in awe of these guys.  Look at them! I say probably too loudly. They’re like [bleep]in’ mountain goats!  And they’re holding lattes!

I try to gather up the tattered strings of my self-esteem and go back beach exploring and taking photos.

When we were down this way the day before, we stopped for lunch in the Bodega Bay area at The Tides Wharf Restaurant. Turns out this was where Hitchcock’s The Birds was filmed. Being an avid reader and knower of all things trivial, I go on all intellectual-like about how the short story of The Birds took place on the east coast, Maine or Massachusetts or some such thing. Always in need of a self-esteem boost, I look it up in Wikipedia to I can prove my point to all fellow diners within listening range. Hey, y’all, I read.

But chances are, the hapless victims of the feathered fiends opted for the comfort of fizzy wine to dull the sounds of the seagulls pounding at the windows.  I’m sure of it.

*Peaceful Easy Feeling, The Eagles
*Layla, Derek and the Dominoes
*Benny and the Jets, Elton John

Addendum:
A true story . . .
After our lunch at the Tides Wharf Restaurant, the Husband makes a confession. I don’t want to creep you out or anything, says he.
Too late now, I tell him.  You probably should used a different opening. But go ahead, shoot.
The Husband, who admits he rarely remembers a dream, tells me that he indeed had a dream about sitting in this restaurant.  A recurring dream.  With the same floor to ceiling windows overlooking the ocean.  The  scenic view and sitting at the same table.
Well, that’s just a bit unsettling.
What happened in your dream? I ask
Nothing. I don’t remember anything happening, he says.
But you say it’s a dream you’ve had more than once?
Several times, for years.
I’m struggling for a link here.  Something profound.  Well, was there anyone with you? I ask him.
I think so. Yeah.
A pause in the conversation as we both think this one through.  My logic path has taken me on the ramp to the Highway of Doom. Attacks by militant seagulls and how driving a convertible would be a pretty bad idea in a town of really pissed off birds.  Could his dreams be a prophesy of things to come? Are we the catalysts for impending disaster by tucking into those crab cakes?  Egads, what if we’ve opened the door to a zombie apocalypse?
Wait a minute . . . someone was with him?  A quick downshift from seagull zombies to potential competition.
Well, he says before the pause is too long to negate it, it must have been you. Since you were there with me today.
Ah, well played, Husband. Well played.

Posted in vacation. Bookmark the permalink.