Wake up, little guy. It’s time for your nap.

What’s more adorable than a little yellow puppy?  A little yellow puppy taking a nap, that’s what. As if I actually have to say it.
Yaxley has been handling office time so well these past couple of weeks that we’ve promoted him to full-time work. His mornings at home start with doing his important business duties outside, grabbing some kibble for breakfast and then a few minutes for a quick chew on the family dog’s leg.
After I pack up everyone’s lunches for the day, I toss the little guy in the car for the ride to the office.  ﻿﻿
Well, that sounds harsh. I don’t actually toss him, of course. It’s more like he gets lifted onto the backseat so he can walk into his crate. Oh, this is magical – I open the crate door and Yaxley walks in and lays down.  He does it his own self. (Thank you, thank you to Susie Nash, this litter’s breeder/caretaker, for crate training these pups for us!)
Once in the office door, it’s a few minutes of manic glee. Holy Cow, we haven’t seen this place since yesterday! To be capped off by some serious nap time. 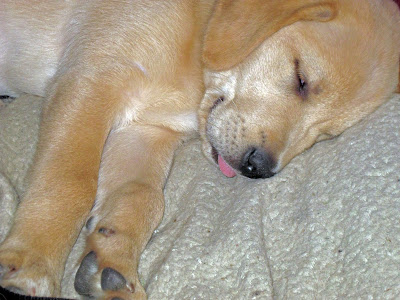 Yaxley’s primary focus these last few days has been to grow. And being a growing pup is a job that takes intense concentration. You can’t afford to lose focus or you might turn into a chihuahua or something. If he’s going to grow up to be as majestic as his buddy, Micron, then well, he needs his beauty sleep.
﻿

So sleep, he does. What a cutie, too.

Lover of all things Dog.
View all posts by Donna Black-Sword »
← Snow Day Redux
I has a stick. It’s gonna be a good day. →