Twitter Facebook RSS Feed
← Hop aboard the Euka Express
Question: What does dog food and powered flight have in common? →

Oh Bodine! Nobody move!, I say. I’m getting the camera.  Which is only three steps away on the kitchen counter.  I click off the lens cap, turn to focus and snap this.

And absolutely not the scene I had before me a mere five seconds ago. The dogs are fresh from their bath, damp and clean.  Bodine came up from the basement for his evening rounds and had curled up next to the two of them on the dog bed. He was grooming them. Alternating dogs to lick their fur dry. And purring. Seriously.

Somehow bizarre, adorable and strangely disturbing all at the same time.

The shot I got instead is Bodine acting like a cat.  It smells like papaya and wet labrador in here, he says, ears back to show his disgust in the canine funkitude. He wants you to know that I’m totally lying to you and he would never (Never! he says) groom a wet dog.

Meanwhile Jager, the Master of the Hunt and Avoider of  All Things Bath-related, is keeping a secured safe distance lest his stanky self be tossed into the tub next. 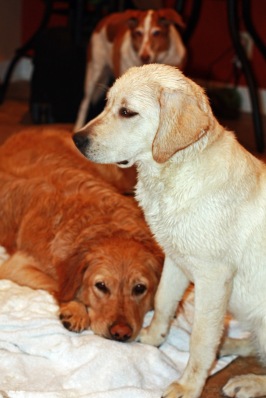 Lover of all things Dog.
View all posts by Donna Black-Sword »
← Hop aboard the Euka Express
Question: What does dog food and powered flight have in common? →