Why does Twitter Noob sound naughty when you say it out loud?

I have to admit, I tell my Favorite Kid.  I hate feeling like such a noob. I’m just not getting this Twitter thing.

It’s where you type in status updates that can only be 140 characters . . ., he begins to explain.

Yeah, I guess I know that. But I don’t get why. I mean, what do people talk about with such urgent need? Honestly, what could I be doing that needs to be announced like, right now?  My imagination is cranking as I think about something clever that would net me some followers, though.

Well, there’s those thoughtful quotes that I could borrow from another puppy raiser’s Facebook statuses (thanks D.N.!), like . . .

Every time I read ROFL, I hear Scooby Doo trying to say waffle.

Well, you could do that, says the kid. Or you might tweet when you’ve updated the dog blog and add a link to the site. Post some cute photos of the dogs doing something funny. Stuff like that. Sometimes,  Ma, it’s fun just to follow others to see what they’re doing.

Why does that sound like stalking? I wonder. Oh, because it kinda is.
﻿

﻿I created my PuppySword Twitter account earlier in the year, but just could not get myself inspired to use it much. While I’m trying to build up some street cred, I’ve started following some folk who share such profundities as to make it all worth my while.  Celebs like Jim Gaffigan (“so suddenly wearing a sombrero while I jog makes me a wierdo?”) and Simon Pegg (“Minnie won’t sit still. Think it’s because she had her bum shaved today. She usual experiences a little discomfort post groom. I know I do”) are great for making me snort when I laugh. Extra special when I imagine the words in their voices.

And the other dog bloggers out there keep me motivated. PupFan and Pamela at S_Wagging are always a good source of dog-related info and  Elizabeth at the Chronicles of Cardigan is just a genius writer. (When I grow up, I want to be like them. And have long legs. I want that too.)  I’ve added NPR and CNN updates because I wanna be all smart that way. My Twitter newsfeed is on a constant roll providing all the trivia an information voyeur like me wants to see in 140 characters or less.

Ah, but just this past week I’m starting to see why instant news at your fingertips can be useful to the information hungry masses.

With the upcoming CCI E litter showing up so soon, there’s some rather important stuff that’s gotta get out there all timely like. Taya’s E litter is due this week, possibly on September 15. There’s the important task of voting for the name of the first born pup.  Whether the first pup will be a girl or boy is a secret that Taya’s keeping for now. So we get to vote on two names.

Hey, choose whatever name is meaningful to you, of course. But I have to just get out there that I don’t think there are nearly enough assistance dogs named Elvis. We need at least one more.

And I voted for Emma for a little girly girl pup that is destined to grow up to be a miracle for someone.

Click on the caption under the CCI photo on top or click here to vote for your favorite puppy name.

Live stream of the puppies coming up

And once the fun buns are out of the oven, Eukanuba has arranged for a live stream of their fuzzy goodness. Teeth-gritting meetings at work? No problem, hook your laptop into the feed and feel the stress melt away as you watch the live action.  Slipping out of your chair during another boring presentation? No matter, you know where to turn now, don’t you?

Over the next eight weeks, never will you lament there’s nothing good to watch on cable.  Instead, you’ll just wave your hand dismissively at the TV and crank up the laptop to watch bouncy retriever pups at play.

When the pups are named, you can pick your favorite cotton ball or two to follow. After eight weeks, the pups will go out to their puppy raisers. And many of these folk will be online in the various social media forums to share their pup’s derring-do over the next sixteen months. 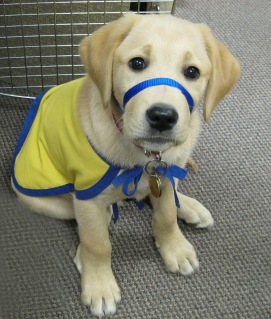 Sounds like you just yourself got a full calendar of puppy goodness.

Try to keep up now

Ok, so here’s where to get the latest scoop on this Eukanuba sponsored CCI E litter.

Oh, and of course right here on the dog blog. I’ll give you a heads up now to add memory to your laptops.  I’m gonna be sharing puppy photos soon. Lots and lots of ’em.  !function(d,s,id){var js,fjs=d.getElementsByTagName(s)[0];if(!d.getElementById(id)){js=d.createElement(s);js.id=id;js.src=”//platform.twitter.com/widgets.js”;fjs.parentNode.insertBefore(js,fjs);}}(document,”script”,”twitter-wjs”);