It’s Iditarod time. folk!  Iditarod 2012 starts this weekend on March 3.  Check out Iditarod.com for more info on this year’s mushers and to keep track over the next few harrowing days as these teams race for Nome.

Photo above is from Iditarod 2005. The kid is a junior dog handler, helping to bring Rick Swenson’s dog team to the start line. Derek is the guy in pink and black near the front.  See him?  Yeah, he also has a white ballcap on.

Anyone who wonders if these dogs really want to run this race, just check out the wheel dog, second up from the sled.  On two hind legs and rarin’ to go.  These dogs love to pull.  Which is also why it takes a human team to handle the lot of them at the start line.

The kid took captured this serene Alaskan landscape. I sent him off during a hike at Thunderbird. Between the altitude and my general out-of-shapeness, compounded by a chronic case of the clumsies, I didn’t dare venture off the trail.  Instead, I handed the camera over to the boy scout and let him have at it.  The kid has an artist’s eye, indeed. 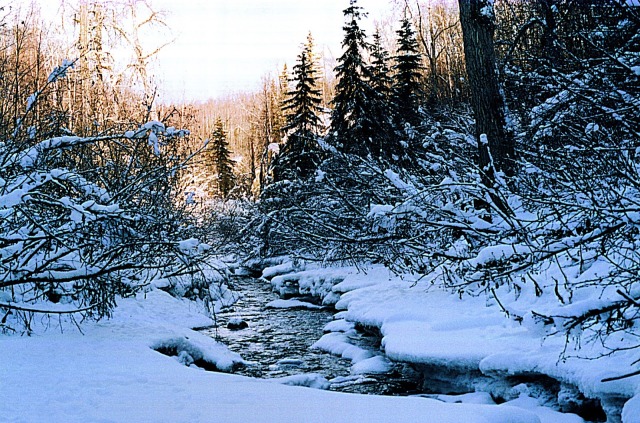