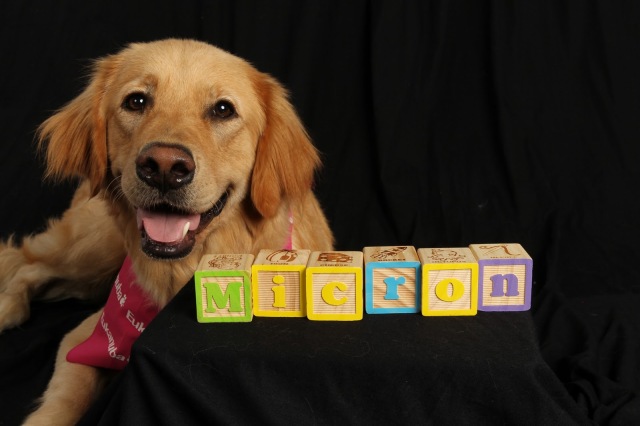 It’s one of those things we learned in our formative years. Like bread crust has more nutrition than the soft bread part or swallowed watermelon seeds will start a melon patch in your belly.  Haven’t we all heard to not cross your eyes or your face will freeze that way?  Toads and warts?  Frog kisses and handsome princes? Pop Rocks, cola and exploding digestive systems?

Bring back any memories?  It’s ok, I’ll hang loose a moment while you reminisce. 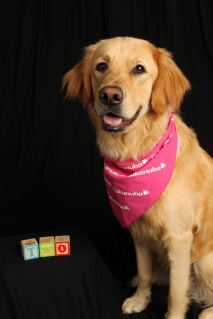 It’s a loss of innocence, isn’t it? Finding out this stuff that we held to heart just isn’t really true.

Let me help you along with that loss of innocence. Ugh, that’s not sounding right. What I mean is I have one more nugget for you – another childhood tenet to crush right before your eyes.  It’s about that dog age thing. You know the one; every one dog year is seven human years.

I know. A lot of you dog people know this just isn’t true. It’s not hard to notice that your sweet fluffy ankle biter has a longer life span than your neighbor’s 150 lb Mastiff.  We’re comparing a 16 year life expectancy of a toy breed against the unfairly short life of a giant breed’s typical eight or nine years. And this calculation isn’t even taking into account the dog’s lifestyle or health criteria. (An obese pooch will suffer very similar health risks as us human beans.)

So what if you crossed the petite Bichon Frise with a Mastiff? Throwing logistics and mental images aside for the moment, I suppose you could average the resulting life expectancy of the puppies at twelve years because these poor funny looking critters would come out a large breed, wouldn’t they?  (Holy cow, but wouldn’t they look like fluffy gargoyle heads with dripping, ropey drool?)

Now this has completely stopped making sense, even to me. There’s a plethora of opinions and resources out there on calculating dog age.  Here’s an article from the Mental Floss website that puts the logic back into my argument. From their story on Fuzzy Math: How do “dog years” work? . . .

The folks at The Dog Guide suggest that when we think about “dog years,” we have to consider the breed and calculate accordingly. Across the board, they say, you can consider the first year of a dog’s life as equivalent to 15 or so human years. By that time, dogs and humans are approaching their adult size and have reached sexual maturity. On their 2nd birthday, you should add about 3-8 more years to your dogs “human age,” depending on size, and value each dog year as being worth 4-5 human years from that point on. 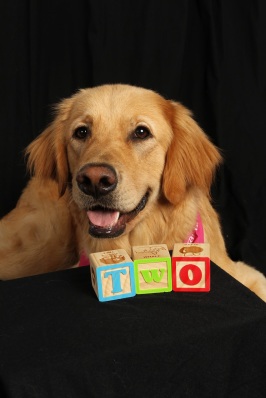 Let’s put this theory to work. The mighty Micron has just celebrated his second birthday on September 23. We’ll start with the 15 years suggestion for his first 12 months, then considering his large-breed retriever heritage let’s add another six years. Fingers and toes tell me that our handsome boy is a mature 21 years old in human years. Yep, I only have ten finger and ten toes, so I had to carry a digit (heh heh – get it? carry a digit? oh, never mind).

Now the final test – does this math make sense when compared to his actual maturity? That is, does Micron fit the 21 year old model we’ve designed?

Well, he’s a college drop-out who’s moved back into my house. [check] The first thing he did when he came back home from dog college was flop onto his old bed and ask when dinner was.  And every time he’s out with me in public, the girls flock to him like he’s the bachelor on some reality show or something. So yeah, I’m seeing a match here with the fuzzy math.

I guess that means next September when Micron’s three years old, he’ll really be 26.  Huh.  Maybe he’ll have a job by then. 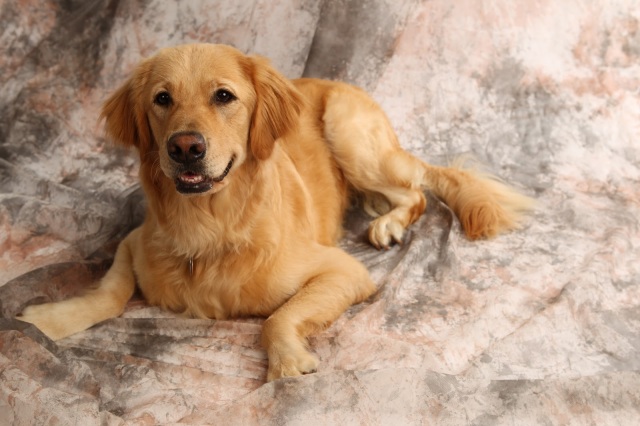 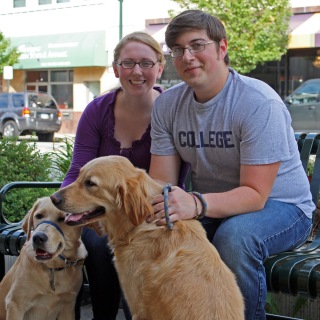 Micron shares his birthday month with my favorite kid.  The Husband and I traveled to the BGSU campus (that’s a college, Micron) to celebrate with Derek and his adorable girlfriend, Sam.

Derek turned 22 on September 16. So let’s see, doing the math backwards, that makes him around two in dog years; about the same as Micron.

I took Micron to a studio for his two year photo shoot. A few of the better shots you’ll see above.  But I just gotta share some of the outtakes, too.  I do believe some of these have captured Micron as his true goober self. 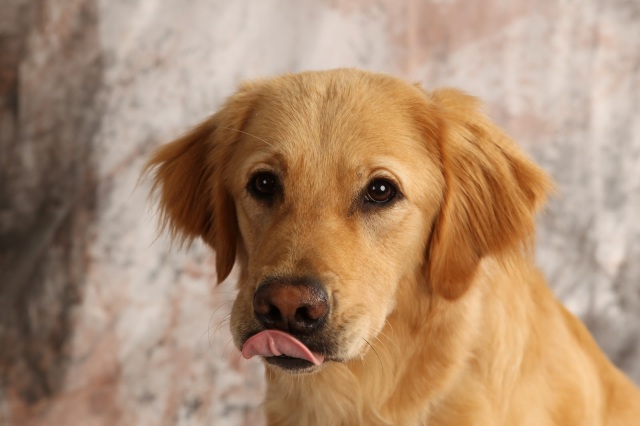 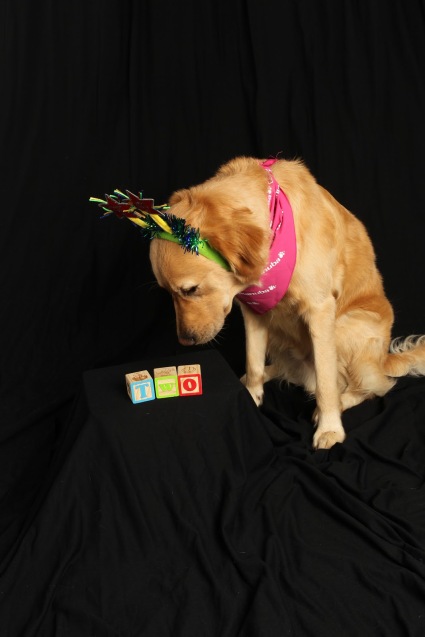 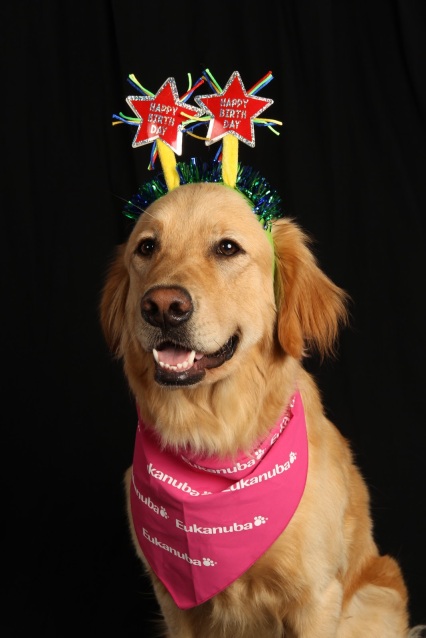 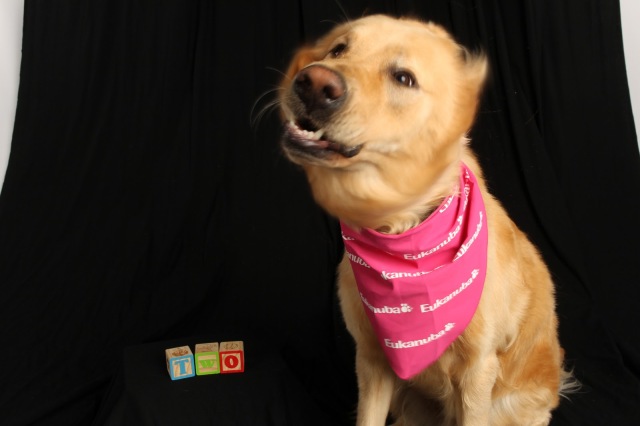 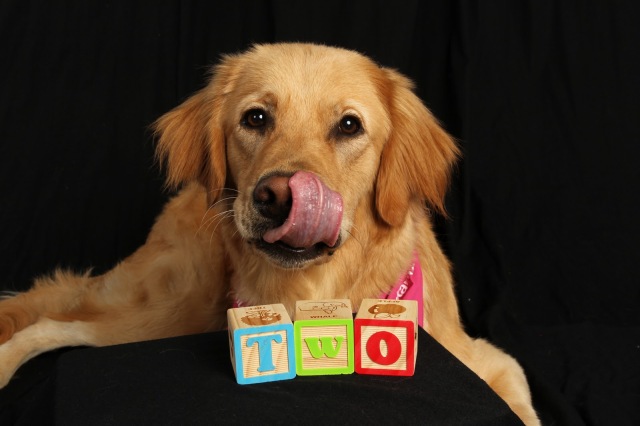 The studio shots are by Flash Photography of Dayton. If you’re anywhere near the Dayton OH area, you may just want to check this place out. For a flat fee, you’re provided a professional photo session customized to your request. All photos are given to you on a flash drive, along with a copyright release to use them however you wish. No photo packages to stress over, just your digital images.

Thanks for the great photo session, Flash!  And for pulling out that Happy Birthday headpiece. Apologies for the squeaky ball, though. Hope you got the dog slobber off of it ok.

We’ll see you again in a couple of months for our Christmas shoot.

Lover of all things Dog.
View all posts by Donna Black-Sword »
← It was a dark and stormy night
Made of tuff stuff →