Micron! cries Holly. She runs into the kitchen where The Mighty is licking the last of the peanut butter from inside his Kong toy.

You’ll never guess what I did today! says Holly. Never in a gazillion dog years! Guess!

Sounds like the odds are against me, says Micron. But whatever it was, I know it didn’t involve a peanut butter Kong on the sofa. So there.

Dang, says Holly. But listen to this! I got to fight the Red Baron today!

You fought a frozen pizza? asks Micron. Who won?
Not a pizza, silly, says Holly. The Red Baron! I guess Snoopy didn’t show up and I was the only dog around to do the job.


Wait, says Micron. What? You flew a biplane today?

Ok, see, I was gonna, says Holly. I really wanted to. Cuz you know “Danger” is my middle name.

I think, says Micron. Your middle name is actually “Drop it”. But don’t let me interrupt your story, little one. Explain to me how you didn’t have a fight with a frozen pizza.

I didn’t not have a fight with a frozen pizza, Micron! says Holly. She pauses a moment to think through that last sentence, shakes her head and continues. No, I mean The Red Baron! Only the toughest and fiercest pilot in WWI.  Well, on the German side, anyway. They don’t even have pizza in Germany. Everybody knows that.

They do too, says Micron. They just put sausage on it and call it a jagerschnitzel pie.

Oh, says Holly. Makes sense. Anyway, we’re at Wright Patterson Air Force Museum and there’s all these biplanes buzzing around, but nobody can find Snoopy.

Maybe too much root beer with that French lass, says Micron. Beagles don’t know to “say when.”

That’s what I thought, too, says Holly. So, I’m looking for the Sopwith Camel …

Stop, says Micron. Let’s see where we are so far. You’re filling in for a missing fighter pilot beagle who’s rumored to be in France nursing a tummy ache and so now you need to find a sopping wet camel to ride so you cannot have a fight with a frozen jagerschnitzel pie in Germany. Am I keeping up ok? 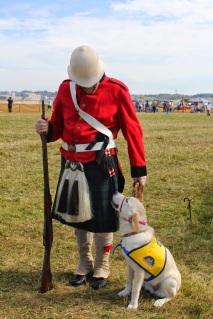 Please continue, says Micron. Tell me about the sopping wet camel. Did you find it? And did it spit …[snort] jagerschnitzel pie on you?

A … Sopwith … Camel, says Holly slowly. It’s Snoopy’s biplane! I’m trying to find it on the airfield when I come across a Kiltie soldier on patrol. He took a quick break when I came up to him and gave me some great advice.

Which was?, asks Micron.

Not to eat the horsehair thingy attached to his belt, says Holly.

Huh, says Holly. How do you know that?

Gotcha, says Holly. So anyway we walk and walk. Planes everywhere you look. Up in the air and on the ground. And you have to watch for these cars that go putt-putt-putt-coff-putt. You would have liked these cars. They go pretty slow, so even you could catch one.

Yeah, [snicker] good story, says Holly. Keep telling yourself that. Ok, so I finally find the Sopwith Camel and I’m ready to jump in the cockpit and lick some of the dials to get this party started, but I ran into a problem.

Ok course you did, says Micron. Tell me, what could possibly keep a six month old puppy from flying a WWI biplane to fight the Red Baron in the great blue yonder? I mean, besides the obvious.

Like not having thumbs? I know, right? says Holly. Well, I wanted to. Real bad, too. But it was kinda hot out and we walked so much, that … I … um … got tired.

Maybe you still could have chased one of those putt-putt cars, says Micron.

Not funny, says Holly. I asked Food Lady to carry me, but she just rolled her eyes and did that sighing sound. I had to walk – Walk! – all the way back to the car. I’m just a puppy.

A puppy who imagines she can fly an airplane, says Micron. What could possibly go wrong?

I can too fly an airplane! says Holly. I think. How hard can it be anyway? My feet just got lazy. We made a canteen stop for a water break and I had a Red Cross nurse massage my paws.

Really, little one?, asks Micron. Was it that bad? You actually needed a paw massage?

Well, says Holly. Need is a strong word. But I did want to stop and get petted anyway. She was real nice, the nurse.

Right, says Micron. So with Snoopy in France and you in the infirmary, I suppose the Red Baron got away again?

Yeah, sighs Holly. I guess he did. Maybe I’m not the right girl for the job after all.

Don’t be too hard on yourself, Holly, says Micron. You’ll learn to be good at lots of things, like helping people, instead of mid-air battles in a war that ended a thousand hundred years ago. Just keep your dreams a little closer to dog’s green earth and you’ll do great.

Anyway, continues Micron. There’s only one I can think of that’s tough enough to take on someone like the Red Baron.

Bodine the Cat, they both say together.