It’s what makes him charming

Oh for the love of Cat, says Bodine.  What the heck are you on about now?

Hey Bodine, I say. I thought you were in the basement taking care of, um, your business. Lookit, it’s fine if you want to hang around and watch, but please don’t be underfoot. I set down the two red plates we’ll be using for the next set of Micron’s Dognition exercises. I look up with a mixture of dismay and dread to see the cat doing his signature Saturday Night Fever Tony Manero strut across the kitchen floor. He sits down on one of the red plates and proceeds to clean his nether regions.

Like I said, cat o’mine, I need you to be somewhere else right now, I say.  As in, anywhere but right here would be great. Your options are wide open.

Well, I sure can’t go back down to the basement right now, says Bodine. Actually, you probably shouldn’t either. Not for a while anyway.  In fact, I’d recommend you give it a full fifteen, then head down there with a big scooper for the poo. . .

Stop!, I say. You’re making me woozy just thinking about it.  Why don’t you head out to the living room for a while then.  I don’t want any distractions for Micron.

Good luck with that one, Sparky, says Bodine.  Isn’t “Distractible” his middle name?

Right, I say. And “Look A’Squirrel” should be his last name. Micron needs to focus on his Dognition exercises, so I can’t have you in the kitchen. I’m sure you understand. I’d say it’s nothing personal, but you know it really is you.

Yap on all you want, Food Lady, says Bodine.  But I’m not going anywhere. Even your puny hooman brain has to have figured out by now that nothing happens in this house unless I either cause it or approve it. And, heh, just the mere mention of Micron and cognitive exercises has my keen feline senses intrigued.

The cat moves to resumes his personal cleansing ritual while waving a front paw at me.

Carry on, says Bodine in a muffled voice.

Taken directly from last week’s blog post (It’s all fun and games), here was my prediction for Micron’s results in the Memory module for his Dognition profile.

“Ok, so my prediction for the Memory games, you ask?  Judging from the results of my last two guesses on Communication and Cunning, I don’t have any confidence about playing the lottery anytime soon. But here goes anyway.

“The scale for Memory goes from 1-Present Minded to 10-Retrospective.  I can play it safe by predicting Micron will fall right in the middle of the scale. Again. But I’m not that kind of girl.

“Considering that my food motivated friend will likely be encouraged to recall where a treat has been placed, I’m gonna say the mighty Micron will be a 6 on the scale.”

I admit I was being overly cautious on this one. As much as I wanted to believe that the mighty Micron would do well on the Memory exercises, I just wasn’t feeling the vibes that he would actually excel.  Middle of the road is where I thought the big guy would flomp himself down on this scale.

We started with a warm up game to see if Micron had an understanding that a treasured item still existed even if he couldn’t see it.  We showed him that, yes indeed, a dog cookie was taking space within his immediate universe. And then, right in front of him, hid the thing under a red Solo cup.

Easy ’nuff, right?  But what if we made him wait for a minute or two before he could claim it? How about two and half minutes later . . . and we were using two red Solo cups?

[yawn], says Micron. Give me something tough here, willya?

So here’s where we came out on Memory – note the green bar below. See it down there? It’s the one that is going all the way to Retrospective.  Micron’s kinda off the charts on memory, do you think?

But before you go getting all impressed with this dog and those sharpened neurons snapping about in that golden cranium, let me stop you right here.   Yes, it’s true Micron did go a full two and a half minutes totally remembering which red Solo cup held the awaiting treat.  But one dog’s stellar feats of memory is another dog’s, well, fixation.

Micron does remember things when he wants to. Like the Nerf ball we keep nearly, but not quite, out of reach on a file cabinet in the office. Or the verboten stuffed toy on a co-worker’s desk requiring only a two-legged circus dog stance to reach. He knows precisely who is good for a treat and what is expected of him to score a second one.

All of this knowledge is stocked away in the memory brain cells like well-labeled boxes.  And I believe this Memory skillset has a kissing cousin relationship with that blue bar up there on the scale that is edging towards the Wily side.  Hand in sweaty hand, those two skills.

Micron is the kind of dog that likes to see all the pieces before he solves the puzzle. Reasoning is the ability to solve a problem when you can’t see the answer and have to imagine the solution.

Micron scored more towards the impulsive end, which means he doesn’t get caught up in the details – especially details that aren’t right in front of him. There is no shame in this. The reasoning games are the most difficult in the Toolkit and most dogs find them extremely challenging.

From Micron’s performance in the Communication dimension, he relies on you for help when making decisions. He obviously sees you as his best bet when solving a problem.

I showed Micron two red Solo cups, both empty and upside down. Then I let him see I had a treat. Blocking my hand with a sheet of paper, I didn’t allow him to see under which cup I hid the treat. And lastly, I picked up the empty cup to show him there was no treat there.  And . . . Micron, release! In doing this exercise, Micron was challenged to understand the relationship between the empty cup and his treasure.  To rule out what is not to determine what is.

And that, people, is a whole ‘nuther way of thinking for a canine noggin. According to Dognition, this is a difficult task for many dogs. In fact, crows do better at this type of reasoning, which is something I could have gone the rest of my life without knowing.

That’s right. A corn-eatin’ crow is smarter than my dog in the red Solo cup game.

I’m told there’s no shame in how Micron thought this one through, but instead that I can appreciate he relies on me for assistance in solving problems.

To which I will say, you’re not kidding.  Micron’s cup choice was determined by which side of a central placemarker he positioned himself. When tasked with making the impossible decision — right cup or left cup — the yellow dog sat on the center placemarker directly in front of me, connected with eye contact, and barked.

Get your treat, I told him.

I can’t, he said.
﻿﻿
He didn’t know the answer. And he didn’t want to risk being wrong. Because you see, from completing the memory tests he knew if he went to the wrong cup that he wouldn’t get the treat.  So when he wasn’t sure which side to choose, he trusted me to guide him to the answer.

That’s how we’re bonded, me and him.  You see what we did there? We’ve blended English and Doglish into our own special language.

You know what? That’s deep, y’all. 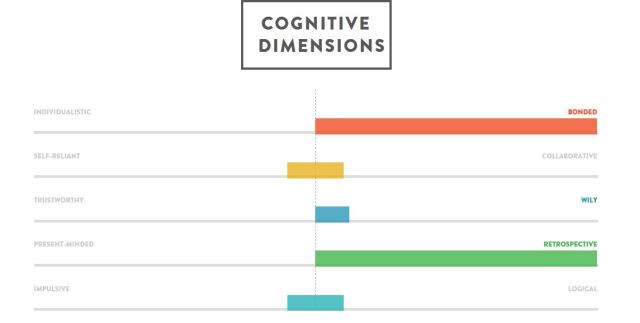 With the completion of all the Dognition exercises, Micron’s results put him neatly into one of the nine profiles:

Go ahead and take a wild guess. I had a feeling about where Micron would land on this grid of Social vs Independent Problem Solving. As every other prediction I’ve made since I started on this Dognition journey, I can enjoy the pleasure of being consistent.

Consistently wrong, that is.

Micron can work a problem out on his own as well as anybody, but he prefers to rely on his secret weapon – you. As a Charmer, Micron has exceptional social skills, which means he can read your body language like a book. He is not above using this information to get his own way. Micron is no fool when it comes to independent problem solving, and his scores reflect a keen understanding of the physical world. However, Micron’s real genius is that he sees you as an ally and partner, and he will usually turn to you for help before trying to figure out a problem on his own.

Now take a look at the photo at the top of this post.  You didn’t get that caption before reading all this, did you? And now it makes sense.

Yep, our mighty Micron is indeed a Charmer. I know, I know . . . tell you something you don’t know. Myself, I was leaning towards thinking he might be a Stargazer, yet I can’t deny the Charmer profile is a tidy fit for his golden personality.

His full profile can be found here on Dognition.

I’m relieved there’s not a set of games for cats. I don’t think I want to know Bodine’s profile. Because, sure as shootin’, it will end in something-path.