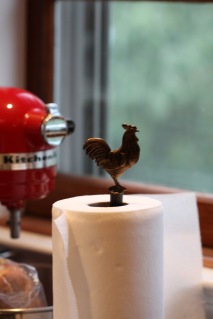 I don’t really like chickens.  We had different genres of walking poultry meat about the farm when I was a tender youth.  The farm goose was a particular jerk as these fellas are wont to be. But the worst was the chicken coop. The guano room of doom.

All the hens were white and were perfect doppelgangers of each other. Some rather nastier in spirit than their sisters, however. It was a crap shoot, so to speak, to collect eggs.  Reach under a plump hen for an egg and you may come back with skin and delicate hand bones intact. But the next hen could be the one that goes all medieval about your arm. You just never knew.

So I really don’t like chickens. They’re icky and smelly and mean. I can’t even abide the taste of these things. I do apologize to anyone who has a meaningful relationship with chickens. I mean no offense. I don’t want to be all up in your business, but you might be rethinking your friend base.

So when I redecorated the kitchen, I adopted a rooster theme. What deep recesses of my brain brought me to surround myself with chicken based artsy fartsy stock?  I can’t explain it.

But I chicken theme it, I did.

So when the grocery had rooster dish towels on clearance last week, I bought a couple to go with my Hannibel Lector inspired decor. 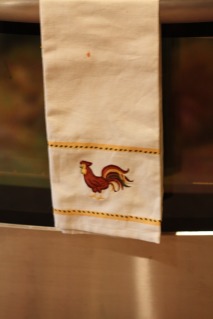 The mighty Micron is an intuitive dog.  He reads people and their moods to a level that is sometimes heart-warming and other times spooky.

He knows about the chickens.

To show his unconditional love, he brought me one of the rooster dish towels.

That’s one down!, he says, wagging his plume tail. 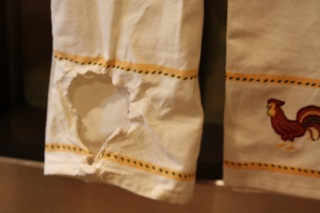 Yep, that dog’s got my back.

Posted in Micron. Bookmark the permalink.