He knows you’re showing these to his girlfriend when he grows up, says my niece. Called my house crying. Couldn’t understand a word he was saying, but I’m pretty sure he’s sick of it. “Bunny ears Ash. I did the Santa hat, but freaking bunny ears?!”

Oh sure, I took photos of the dogs wearing bunny ears. And then posted this gorgeous shot of my two yeller fellers on Facebook. Which prompted Ashley to come to their defense. I’m guessing she’s feeling protective of Yaxley’s tender psyche, as Micron is pretty much rocking the look, wouldn’t you say?

And, as I told Ash, just wait until you’re an empty nester.  It’s either dressing up dogs or a concrete goose on the front porch.


I’m ok with the occasional reference as the Dog Lady. But being the neighborhood’s Concrete Goose Lady implies a whole different category of crazy. So I’ve made my choice and stand by it.  Dogs it is.


As entertaining as this was to put together a photo shoot of dogs in bunny ears (aargh! quit knocking them off, darn it!), I had a solid reason for wanting to do this. No, really I did. And it involves training for the two yellows.

Both Yaxley and Micron are training for different careers. Yaxley as an assistance dog for Canine Companions for Independence and Micron is going to school with Miami Valley Pet Therapy Association to be a member of a pet therapy team. I’m finding a few of the skills needed for both occupations are similar.


Consider this for a moment. You’re enjoying a meal at your favorite restaurant. A lovely chicken picatta and maybe a glass of chilled Pinot Grigio. Deep in conversation with friends about the latest controversy in news, weather or gossip. Ah, nice, isn’t it?  Now what’s the last thing on your mind at the moment? Perhaps, oh I don’t know . . . the floor?

You ever notice the carpets at restaurants?  Walk in with a CCI pup in training and you will, gare-un-teed.  As puppy raisers, we are training these fuzzies to ignore any delicious morsels they come across as they stroll to the table. Tough enough to be sure, but the real challenge is when the pup has settled at your feet. Do you know what’s been safely stored in that cave under the table?

Well, El Dorado’s city of gold for dogs, that’s what. Blackbeard’s lost treasure chest. The family jewels. Oh wait, that doesn’t sound right, does it?  But do you see what I mean?  There’s some good stuff under there and it’s likely been fermenting for some time to ripen into an odoriferous temptation.


So instead of tucking into that hamburger with reckless abandon, we instead pay a lot of attention to the pup.  Ah! Don’t!, we say, until the message gets through.


Because our goal is this . . .a person partnered with this pup will be able to enter their favorite restaurant with the confidence that they can simply enjoy their meal. Their canine companion is there for them, not the glimmering treasure in the dragon’s cave under the table.


Ok, now let’s think about the environment in a medical facility.  A pet therapy team is likely to come across a plethora of non-noshables as well.  Think beyond floors here.  What about open trash cans in patient rooms or personal items stored on easily reachable surfaces?

With the CCI pups, we use the commands No! or Don’t!  With the pet therapy training, I give the Leave it! command to Micron.  And yeah, I sometimes will confuse the commands in the heat of the moment, but the intonation has the same level of business-meaning.  Keep your pie-hole away from that, Buster Brown.

Yaxley doesn’t give me much reason to worry about this.  He’s a pro, turning instantly invisible once under a restaurant table. The feller just curls up and naps lightly with one ear cocked awaiting his next command. What a good dog this guy is.

But the mighty Micron, well, we’ve got some work ahead of us. That dreadful word, distractability, is our nemesis. Ooh, fuzzy thing!, says Micron, mmmph. I just want to roll this around in my mouth for a minute, ok?
No, it’s not ok, I have to tell him. Give that kid his teddy bear back, will you?

With that, I’ll share with you my mastermind-inspired Grand Plan . . . I’m gonna desensitize this goober dog to fuzzy toys.

Here’s a stuffed toy impaled upon my cubicle in the office. Right there at Micron eye level and everything. The thing makes a eerie singing noise when the belly is pressed, which co-workers do. Press the belly, that is, not make eerie singing noises. A rather successful experiment, I think. I only had to remove it from a canine craw a couple of times over the week. Heck, if I tried this a month ago, it would have been eviscerated before lunchtime.

We’ll move onto another stuffed animal next week. Because it’s a good idea to keep it changing and well, because of the complaints by co-workers of the non-belly pressing type. When are you taking that creepy thing home?, they ask politely. 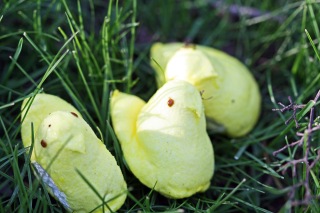 Ok, about the bunny ear photos.  If you notice the photo at top, there are yellow objects at Micron’s feet. Those are Peeps.  You know, those sugary treats that show up in Easter baskets every year even though nobody actually eats them?  Try and describe the taste, I dare you. I popped in one of the yellow harbingers of empty calories just to try to come up with a analogy of the flavor. And, people, this is what they taste like. Nothing. Not cardboard or styrofoam or food, but nothing.  Maybe the appeal is that gritty mouth feel. Peeps must have an excellent Marketing Team, I gotta say.

But anyway, I’m using them as Leave it temptations for the yellow dogs in training.

Ooh, another successful experiment.  But only because even dogs won’t eat these things.

Well, let’s step it up a little then.  On the dog paws with their sugary goodness.

Bumping it up one more notch, Yaxley displays a well-ignored dog biscuit on a paw.

And there it is, good dogs understanding Leave it.  After this shot, I turned to see Jager sniffing around the open Peeps box and thought I might have a problem here.  But no, even potato chip, chocolate, cat poop eating Jager won’t touch ’em.

Maybe I could try the pink Peeps next time.

Not that I’m still fixated on this Peeps thing, but I came across a Time.com article with some trivia on the sugary globules that’s worth sharing.

For example, I found this amazing:

It takes just six seconds to create the popular Marshmallow Peep. When it first debuted in 1953, it took 27 hours to hand-create each edible yellow chick. But now Peeps get cranked out of machines at 3,500 per minute and four million per day.

Now I don’t think the six second thing is so incredible. Rather I’m a little gobsmacked that this whole Peeps concept has survived for 59 years.  There’s some really good ideas that haven’t made it that far.

And then we have some Good Peep News and some Bad Peep News:

Peeps don’t have any fat, but watch out for the sugar rush. Each Peep packs in 32 calories and eight grams of sugar. While yellow remains the most popular of the best-selling, non-chocolate Easter treats (which now come in a variety of shapes and sizes), pink, lavender, blue and white have people popping Peeps too.

Well, the good news is the sand-textured treasures are fat-free.  The bad news is that now you’re going to have the phrase “people popping Peeps” stuck in your head for a little while.