When spots are scary 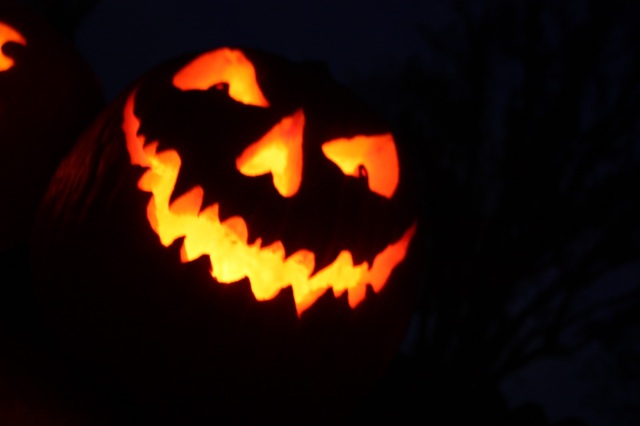 It was the first Halloween at our new house and I was completely jazzed about taking my favorite kid through the neighborhood to get a taste of the local culture. Which sounds kinda exotic, doesn’t it? Local culture, like the shops in Agora or something? Nah, still southwestern Ohio, we just moved from a small farming village to middle class suburbia.  And compared to where we were, yeah we moved up a notch on the food chain.

Anyway, I’ve got the evening all planned out. Crock pot chili’s been simmering all day and I leave just a few minutes early from work to pick the kid up to get him dressed in his evil space alien demon costume. The kid turned six years old that year and loved this Halloween stuff almost as much as his ever so slightly unbalanced mama.

Or that’s what I thought.

But the kid is just poking along.  C’mon! I say.  I shoulda dressed you like a cigarrette, cuz I’m just taking you out for a drag! Put a song in your step, kiddo, this is a big neighborhood now and we only have two hours.

We hit one house, then another. At the third, he’s ready to go home.  Holy cow, are ya serious?  I’ve got something akin to an endorphin rush happening; I wanna go the whole two Beggar Night hours allotted to us.

But there’s no persuading the alien demon. His heart just isn’t into it. Fine, I sigh,swallowing disappointment.  Let’s go home and split up your winnings, all three of them.  Back home and he’s sent upstairs to change out of his costume before dinner.  I’m ladling chili into soup bowls when I hear him call from the top of the stairs, Ma! Look!  This is bad!

Wha? Now I like my halloween creepy, but them’s some ominous words, son. I rush to see what he’s talking about.

And spots! All over his six year old self. He’s completely broken out in chicken pox, he is.

Now it’s late October and as my usual style, I’d negated my nomination for the Mother of the Year award somewhere back in the first quarter.  But this?  How bad of a momma am I? Ugh, don’t answer that. I already know.

Ah, those Halloween memories. After that misstep, things went up from there. The kid and I spent many a season carving scary pumpkins, watching Casper and masquerading through our neighborhood until he finally outgrew me. So now he’s off at college and the Husband and I are left to our own quiet thoughts. And three rather wary dogs. 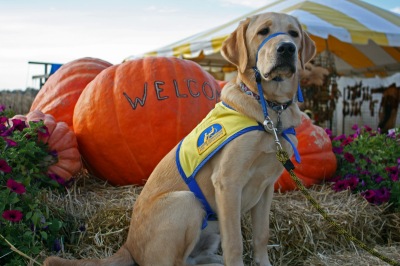 So what to do without my favorite kid around on Halloween this year? Well, we could just stay home and watch scary movies or better yet, put the working cape on Yaxley and head out to the local pumpkin farm. 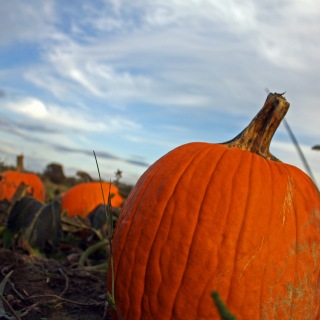 This is Yax’s first Halloween, so we can’t expect him to be a pumpkin expert right off. But we did encourage him to pick out something nice.

That’s a good choice, kiddo.  But let’s find something a little bigger than your head. 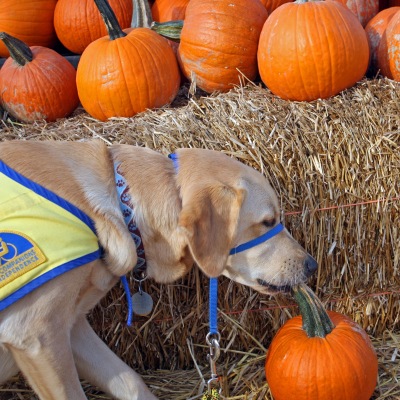 And yep, that one is indeed is larger than your adorable dog noggin. Let’s keep looking shall we?  How ’bout we check out what’s in the punkin field? 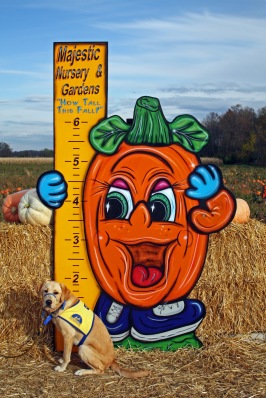 No, Yax, I will not toss you a big orange ball. 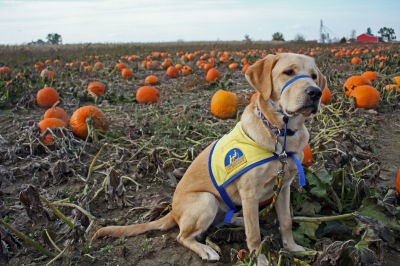 It’s our lucky day, cuz it’s a two-fer special at the pumpkin farm today.  We take these veggies home and I go all old school on them.  No templates or tracings.  Just free hand carving and some dark thoughts to create something that looks like it will take down the squirrel population around here. 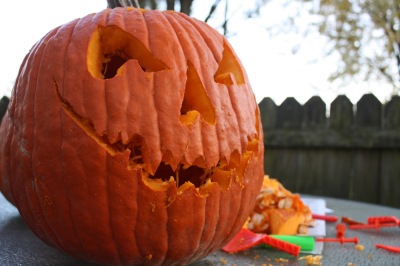 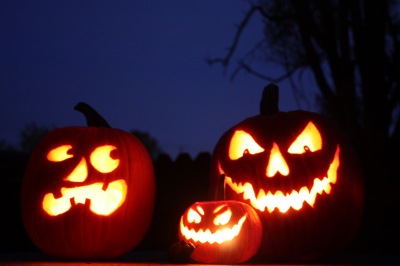 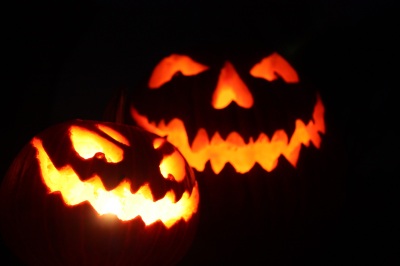 We’re asked by CCI, and rightfully so, to keep the impressionable young pups home on Beggar’s night.  Anyway, it’s a tradition to take Jager (please don’t make me a banana again) out to enjoy the trick or treaters in the neighborhood.

But a Harvest Party in the office is not a bit scary for my sensitive pups. The boys borrowed some costumes from Jager’s stash (take them all, Jager says) and we walked the office neighborhood scoping for treats.

Micron and Yaxley were especially pleased with the attention, their very favorite “treat”, which was topped off the new dog toys they scored from their friends in HR.