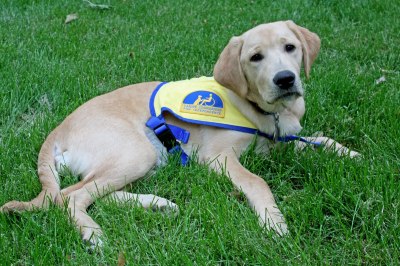 A co-worker had overhead me talking about Yaxley’s Dog Blog the other day.  “Oh, good stuff, I bet,” says my friend, “things like first I slept all day, then I ate dog food.”

Yeah, I know. Managing a Twitter account for Yaxley would be a little much.  But a Dog Blog stuffed with puppy photos? Oh, I’m all over that.

Yaxley is now five months old and growing up quite nicely. What a sturdy temperament; he has been so easy to work with.  For his five month birthday milestone let’s catch up on five things happening in his puppy life right now.

Puppy chewing is reduced to Yellow Alert
Yaxley is working on his adult teeth; nearly all the new white chiclets are in. The need to chew something is not so intense anymore. You can just hear the furniture in the house breath a sigh of relief.  Jager, too.

I found a puppy molar on the carpet at work. While what I thought was kinda exciting (Look! A puppy tooth!), others apparently saw the bloody little nub in a different light. Ugh, sorry about that, guys.

We got us new digs
Spending our workdays in the new office. Getting used to the new place and Yaxley’s been spending most of his time working on his fan base there.  He really has settled in nicely; folk are impressed that a five month old puppy is so well-behaved. But, being a CCI pup, I wouldn’t expect anything less of him. The CCI pups are just made that way.

People ask if my pet dog is as well-behaved as this little yellow CCI pup.  At this point, I drop eye contact and say quietly, not really. No, actually Jager is a little freaky.  But to my defense, Jager was a rescue who found us.  So all his weirdness is stuff he kinda just showed up with. Like the time I walk into the dining room to see Jager standing on the table. He’s shoulder-deep munching in a Mikesell’s potato chip bag like it’s the first meal he’s had since the last full moon. He didn’t get that bad behavior from me. I sit down to eat potato chips.

Making new fuzzy friends
Because the new office is pet friendly, the company has provided a dog park for the fuzzies to get outside for a good run and have some green grass to do their duty. And also because all office dogs are required to pass a behavioral assessment and health check, there’s a confidence that everybody will pretty much get along just fine out there.

Yaxley’s new best friend at the office is a gorgeous German Shepherd.  A big teddy bear of a dog.  And big he is. Natas and Yax do indeed play well together, in a kinda big brother – little brother way. Natas could easily body slam the little yellow guy into the well fertilized turf, but he doesn’t. They take turns rolling each other onto the ground in a give and take. Adorable to watch, unless it’s just rained, which was a learning for me.  I now know to keep a large bath towel at my desk to recover from mucky play sessions.

It’s all about choices, you know. Do I want a bored, restless puppy at my desk in the afternoon? Or a damp, stinky one? My philosophy? A tired puppy is a good puppy.  By good, I mean napping.

Now on the other paw, Yaxley doesn’t seem to understand the big brother rules for his fellow Yorkie and Chihuahua office friends. Yax says, Let’s run!  Let’s roll around!  Let me carry you around for a minute!  It’s taking a little bit more time for these closer-to-the-ground guys to warm up to him.

Yaxley is now working on his socialization skills by visiting new places. In addition to puppy obedience classes, he’s made it to our local library and that emergency trip to the shoe store. Now usually a girl doesn’t have to claim an emergency just to buy shoes, but I was getting desperate. A bit of a double whammy to me last Monday.  The office is a huge campus, about a million and two acres big spread across three floors. Of course, it’s not really, but wear the wrong shoes and that 1:00 meeting might as well be in BFE, excuse my French.

Anyway, I’m over an hour from home and we have puppy class in the evening. So Yaxley got the shoe shopping experience. Holy dog, he says, just look at all these chew toys!  Yeah, that was interesting, but really it went very well. And I wobbled straight back to the car and gnawed the plastic tag off my snappy new flip flops. I got black ones to match my dress slacks, so as to keep that polished look.

Weighing in at 41 pounds, Yax is where he should be at his age. Like the teenage boy that will someday grow into those size 11 feet, Yax’s body will need to catch up to his lanky build and basset hound ears.

Now the ironically named Micron at five months was just a little bigger of a fellow. He just started life as a big-boned dog and by the five month mark was a massive 53 pounds.

At Micron’s turn-in a couple weeks ago, CCI requested for his puppy cape to be returned as well. Because I am a forward thinker, yet sadly not a deep thinker, I asked if I could hang onto it as Yaxley was nearly five months. He would be wearing the logo cape soon, so it was agreed Micron’s cape would be handed down to Yaxley.

A good idea, however not a great idea.  In 20/20 hindsight, we shoulda traded in Micron’s cape for one just a bit smaller.

So hang tight, we have more dog adventures to come now with Yaxley as he grows into a CCI pup in training.  Promise – it will be more than just sleeping and eating from here on out.