Twitter Facebook RSS Feed
← It’s good to have goals, they say
She’s got legs (or Euka at Four Months Old) → 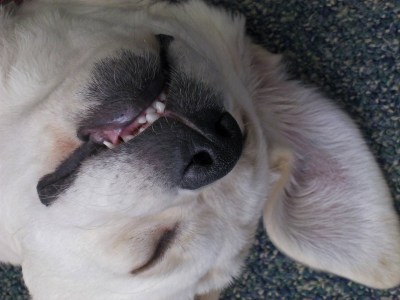 Hot news of the week! Our little polar bear cub is getting her big girl teeth.
The upper two chompers have emerged as well as the four bottom in the front. I should be finding little Euka molars on the carpet soon. [sniff] She’s growing up right before our eyes.
Ah, but the best part about puppy teething is the adrenaline rush from seeing blood splatters on playing puppies. But instead of checking for puncture wounds incurred by two playing puppies, we look into the dark abyss of a puppy maw to see who has bleeding gums from a newly missing baby tooth.
The second best part, I think, is how those top two teeth make her look like a Count Orlok puppy*.  Which leads us to the next obvious thought. If a vampire had a dog, what would they name it, do you think**?
________________________________
*Movie trivia: Nosforatu 1922.   I’d apologize for the obscure movie reference, except this is a Classic, people. And the old fellow had some funny looking teeth now.
**I recall in an Anne Rice vampire novel a German Shepherd adopted by one of her venipuncturing protagonists in New Orleans.  Bonus points*** if you know the name of the dog.  Extra bonus points if you can explain to me why my family wouldn’t let me name my own GSD that same ultra cool name. Because I can’t answer that one.
***By Bonus Points, I mean Thanks for leaving a comment. We’re on a tight budget here.

Lover of all things Dog.
View all posts by Donna Black-Sword »
← It’s good to have goals, they say
She’s got legs (or Euka at Four Months Old) →